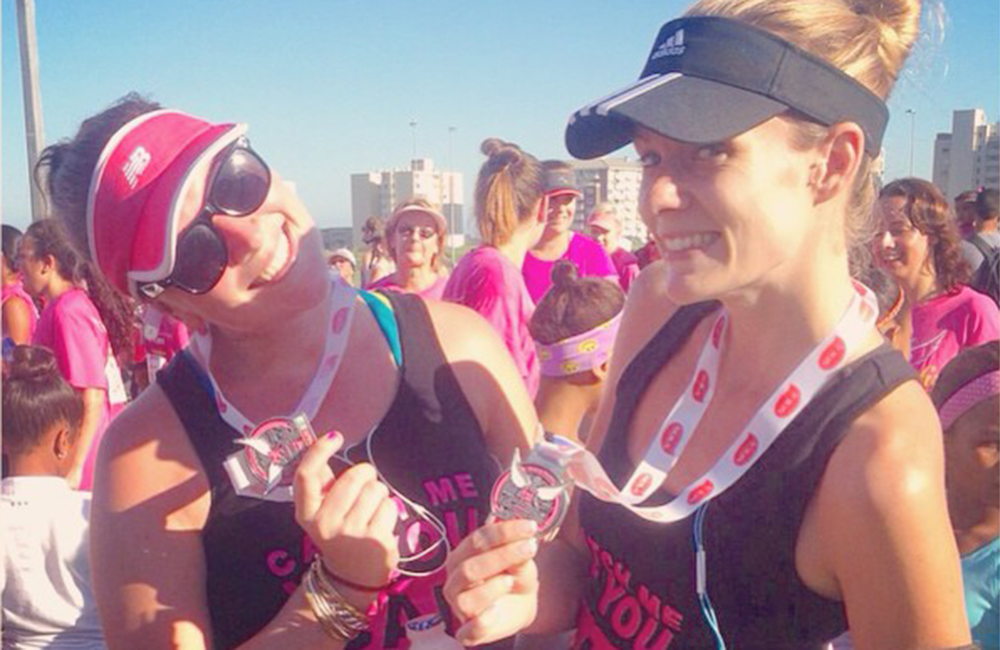 Emily is our CMIYC Leader for Sea Point. Since September 2014, most of her evening or morning runs with our ladies take place along the beautiful Sea Point Promanade. Find out about her running routine, accomplishments and much more in our #MeetTheLeader Interview with Emily.

I accidentally fell into running, I know, weird right?

Well, when my fiance (now husband, yay me!) and I moved into our first flat together in Mouille point, I told him that there is just no way we can live on the Promenade and not run. Although at this stage I enjoyed being active and working out, I was definitely not running fit. At all.

We adopted a run walk routine, walk 1km / run 1km, turn around and repeat till back home. We did this 2 to 3 times a week for roughly 6 months. It was only in January 2014 when I got an email from the Two Oceans marathon stating that I had been randomly selected to run the Half marathon that I really started training to run a further distance than my usual 4km. 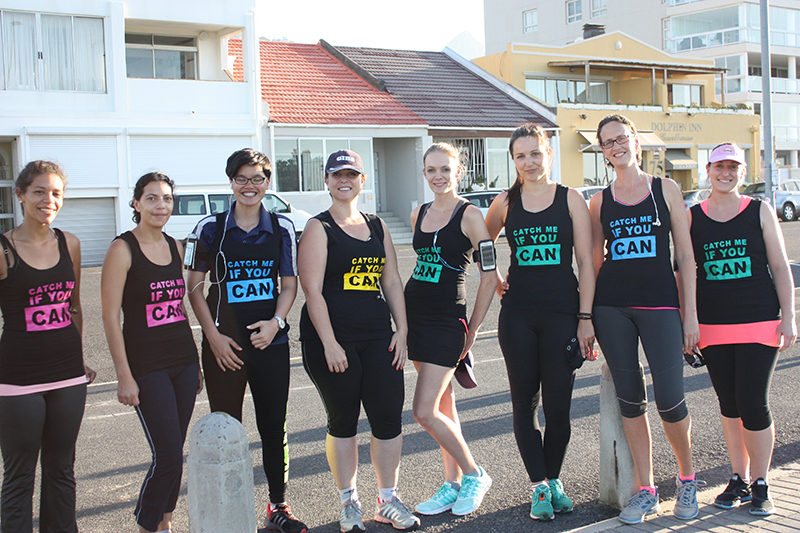 The only reason I initially started running in races was because I was randomly selected into the Two Oceans Half Marathon. (I wasn’t even aware I had a ‘profile’ on the site, I had previously gone on just to read the articles) Towards the end of my training plan and 3 weeks before the event was supposed to take place, I was becoming extremely doubtful that I would even be able to run the full 21.1km distance, never mind that distance with all those hills. This is when I found out that there was a flat half marathon 2 weeks before the two oceans in Gordon’s bay. I decided that I needed to do it, just to make sure that I could run a flat 21.1km route before tackling the distance with hills. Fast forward to now and I have completed 23 half marathons, 2 marathons, and in training to do my first Ultra. (Two Oceans Ultra Marathon)

Runners are driven by different things, different goals, I believe that if you were to ask 5 runners why they run, you will get 5 different answers. And yet, there is a constant common denominator – it’s addictive, those 5 very different answers all yield the same result. My personal reasons to continue running vary depending on when you ask me. I am an extremist in everything that I do, I always need to be faster, or go further. Right now, what keeps me running is the challenge of seeing how far I can go.

3. How do you manage your passion for running and your work & private life?

It’s all about balance – like mentioned before, I am an extremist. So I did struggle to find my balance initially when I first started running. (Yes, my poor husband felt like he had no life) Since then I have managed to better the balance somewhat. That however does change from time to time depending on what I’m training for. When training for a Cape Town Marathon, I used the mornings to cross train (as its winter) and ran 3 times a week in the evening and a long run on a Saturday morning.

The people, I have met the most amazing people that I now get to call friends. I love that there is a feeling of comradely when you spot someone in a CMIYC Shirt. A little smile or wave while running from someone you don’t know but know they are a part of something that you are, really does wonders. 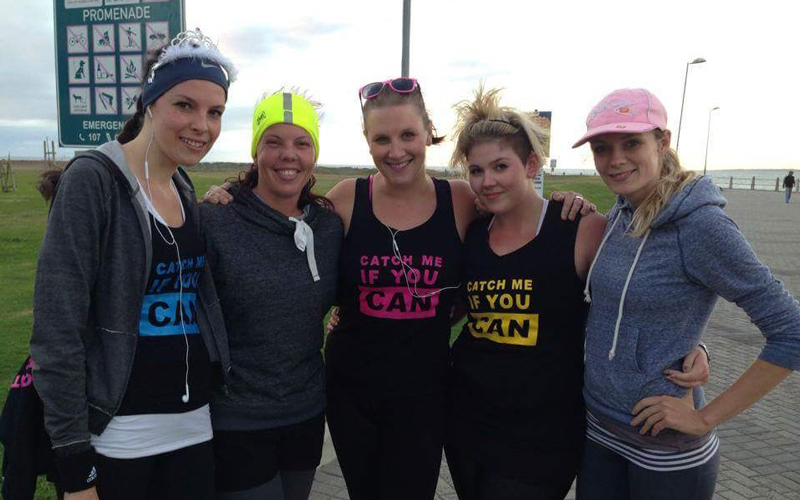 Don’t try doing too much too soon. Start with a run walk program. Don’t try bash out a 5km run on your first day. You will not enjoy it and more than likely think you do not enjoy running because of it. Take it slow, take it easy, and enjoy yourself.

The first thing I thought about when reading this question, was the moment I ran into the house after a 10km run on the promenade to tell my husband that I ran the full 10km distance without stopping once.

You may think this weird as since then I have accomplished what would normally be considered better. I have run further; I have run that same 10km distance a lot faster (I hope) since then.

I think this stands out as my biggest accomplishment because before that day and that run, I never thought it was possible. I never imagined that I would ever be able to run flat out for 10km – and after that one run, anything became possible.

My favorite route when running by myself would have to be the Sea Point promenade into Camps bay and back.

With regards to my favorite race in Cape Town, it’s a 50/50 split between ‘The jive slave route’ and ‘Landmarks’ 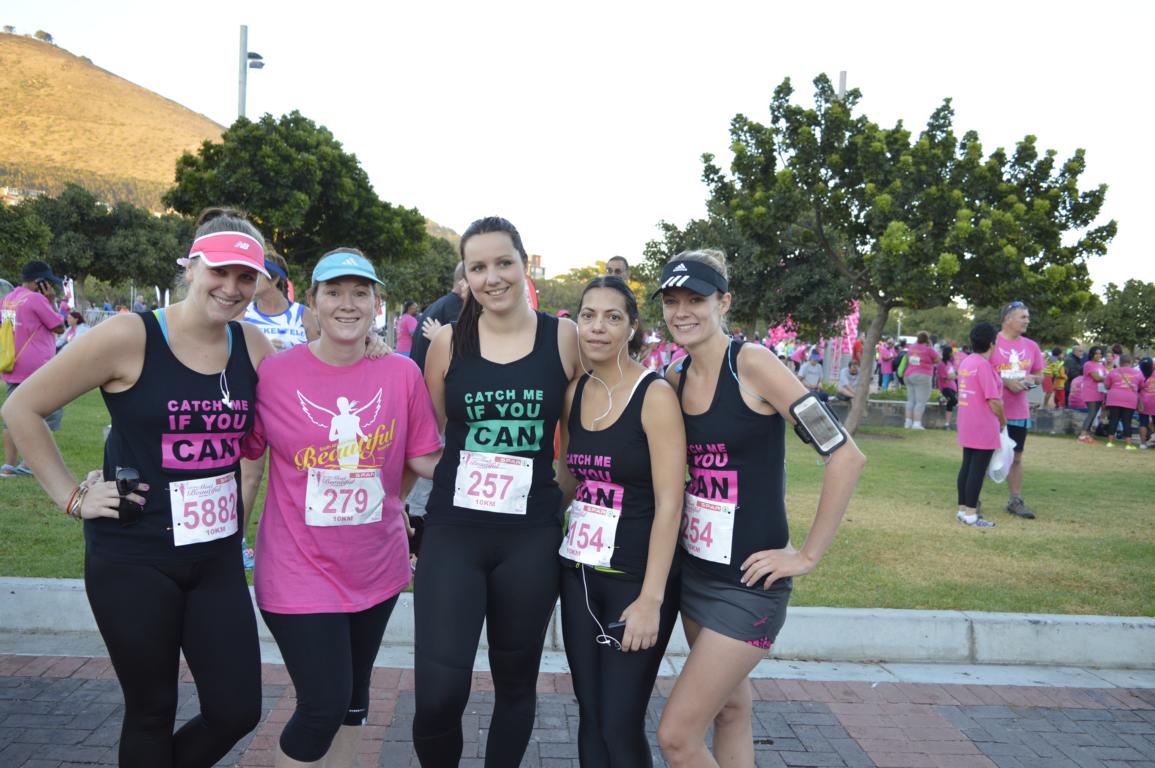 To be as lazy as possible, there is nothing better for me than to snuggle up on the couch for the day and watch series with my husband while he tickles my back, especially in winter. (and yes, he really does tickle my back ALL DAY)

I have just stated my training plan for the Two Oceans Ultra, so I would say that would be the next thing to tick off my lift.

I briefly mentioned it above, I love there is a feeling of comradely when you see another CMIYC Member out on a run. But aside from that, I love that we are an all-female running group. Whether you are looking to start running or to find some motivation to keep running, or whether you just enjoy running in a social group of people, CMIYC if a group that offers all that and more.

Previous Post
Are you really healthy?
Next Post
Weight Loss Program for a ‘Woman on the Go’